Today was our last Colloquium field trip, and it was an on-campus one as well.  This was the trip I was most dreading, probably because I knew I'd have to get in the water.  And as we all know at FGCU: Wherever there's water, there's gators.

We started off walking on the boardwalk from Whitaker Hall to Parking Garage 2.  We learned all about the air conditioning system and the wood that is used to make the boardwalk.  Then we ventured over to the bridge near south Village where we started our journey through the nature trails.  What I didn't know is that there's a slough on campus named after a guy that lived there many, many years ago (I forget the name)! 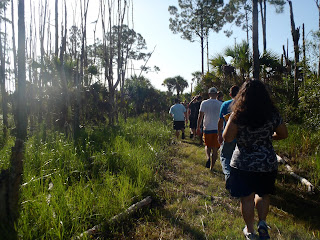 I was so nervous walking through the nature trails.  We were advised to look up and see all of the trees and plants, but I spent most of my time looking down making sure I didn't step on any snakes or trip over any tree roots.  After a long stretch of dry land, I noticed a few puddles.  I walked through them thinking that this must be the wet part of the tour.  I was so wrong!! 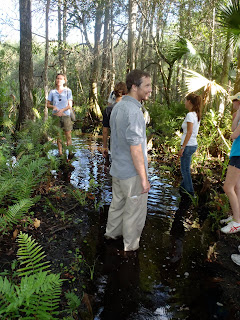 After the little puddle we began the wet part of our tour.  The water was as high as my ankles, and my feet kept getting stuck in the mud.  Our tour guide, Erica, told us how even though it looks dirty, the water is actually really clean (cleaner than most of our drinking water).  And before we all trudged through it, the water was pretty clear.  The water trail went on for another 1/2 a mile to a mile, and the water got deeper and deeper.  For a good portion of the wet trail the water went up to my knees.  It was during that time that the rubber bottoms to my shoes fell off.  I wore old shoes so I could throw them out incase they got muddy.  But I never thought they'd fall apart!! 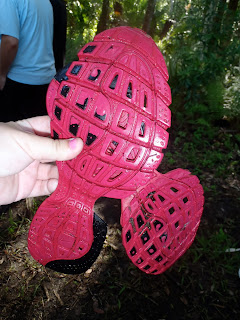 There were roots and broken branches in the water, and with the mud all turned up, it was hard to see them.  There were so many times where I nearly fell because I tripped over a tree root or branch.  I wouldn't care so much, but stupid me left my cell phone in my pocket.  Luckily I never actually fell...just a few stumbles here and there.  Towards the end we were walking through knee deep water and there were plants towering above me.  It was kind of cool, but I was still so scared that I just wanted to get out of there. 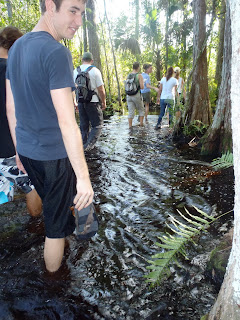 I was scared about the snakes the most, but we learned that there wouldn't be any snakes in the water we were in.  I forget the exact reason, but it was reassuring...and made me slightly less nervous.  After what seemed like an eternity, the water began to get lower and lower, and we finally walked out onto dry land.  My heart was racing and I was still breathing pretty heavy.  It was a huge adrenaline rush, and I've never had that kind of feeling before.  The student naturalists (who served as our tour guides) told us how relaxing a deep-water nature trail walk can be and that we should do it often.  At first I laughed, but now I kind of like the idea.

This was the second most traumatizing experience in my entire life (the first being snorkeling in Labadee).  But in retrospect, I'd do it all again.  In fact, if anyone wants to go through the trail that has water that is waist-high, let me know.  I'd love to do it, but I won't go alone. 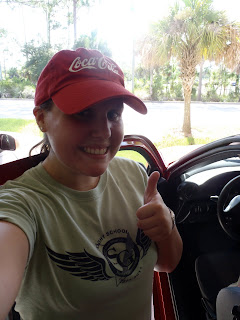 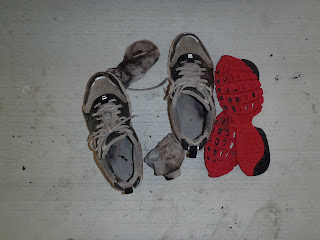 Posted by Christina Bockisch at 10:53 AM