Song of the Week - "This Ain't Nothin" by Craig Morgan

I cry a little every time I hear this song on the radio, and I pretty much bawled the first time I saw this video.  The lyrics are incredible and Craig Morgan's voice is perfect.

Posted by Christina Bockisch at 12:02 AM No comments:

I can't waste any more time

As I start my junior year of college, I'm full of so many different emotions.  I'm sad that I'm already halfway done with my undergraduate career, happy to start my upper division courses, and scared that I may not be on track.

I spent two years in majors that I hated - Secondary Math Education, Math, Elementary Education, and various combinations of the three.  I stayed within those three majors for so long because it was safe.  I knew I was capable of being an educator, I knew where to find a job, and I knew about the field.

Now I'm a Public Relations major (and Creative Writing minor), and I finally feel like this major is the right fit for me.  I'm taking two Communications courses which I am head over heels in love with, two writing classes which will challenge me in every way possible, and then there's my Public Relations course...and it absolutely terrifies me.

I know the Public Relations field is demanding and rewarding, but I'm still afraid that it may not be the perfect fit.  Even though I want to work in the non-profit field, I could still end up doing public relations work rather than event coordinating.  Even though I'm organized and always meet deadlines, I still have a fear that I may not be cut out for it.  And unlike education, I don't know much about the different jobs within public relations.

FGCU has a great communications/public relations program.  The professors are amazing and I know that they'll calm my doubts and answer my questions.  But I'm still nervous that I'll come out of this Principles of PR class realizing that PR isn't for me.  And then I'll be right back where I started...kind of. I know that I could always just major in Communication Studies, especially if I love my basic communication courses so much.  So maybe I won't be right back where I started after realizing that education wasn't for me.

All I know is that I'm a junior now and I can't waste any more time.  It's time to pick a major and stick with it.
Posted by Christina Bockisch at 11:18 PM No comments:

I recently fell in love with frozen yogurt.  Regular ice cream upsets my stomach sometimes, but frozen yogurt doesn't do that at all.
But like most things, all frozen yogurts aren't created equal.
I've only been to three (3) different frozen yogurt stores so far, but I have a list of 10-15 that I would like to visit.
As of now, here's my ranking of my favorite frozen yogurt stores.  (NOTE: The location in parenthesis is the one I went to.  All of these stores have other locations on the east coast of Florida).
1. YogurtMania (Miramar, FL) 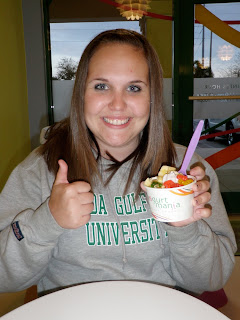 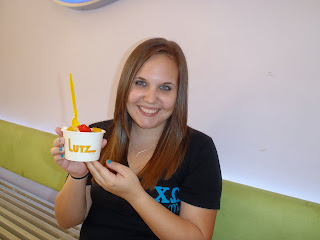 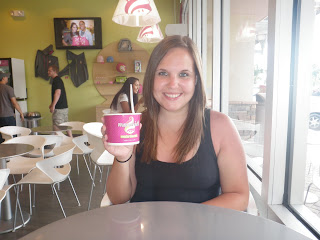 It's hard to imagine that I'm already a junior in college!!  After taking two incredible courses this summer, I decided to rank my top 10 favorite classes so far.  The first five were incredible hard to rank because they were all so memorable and amazing in their own ways.  But I'm satisfied with my rankings.  I also decided to rank my 5 least favorite classes...just for the heck of it.

I've listed the class, professor, and the semester I took the class.

**I ended up dropping Intro to Sociology halfway through because no matter what I did, I could not pass an exam.  Social problems was so much better!
Posted by Christina Bockisch at 1:17 AM No comments:

Colloquium: How bad is it?

If you're a student at FGCU, you know that in order to graduate you have to take a class called University Colloquium.  And there's a good chance you're probably dreading having to take it.  You've heard the complaints, but you've rarely heard any positives about the course.  If you're like me, you take it over the summer to simply get it over with.  But after taking this class, and enjoying every second of it, I really don't understand why everyone is complaining.  In fact, I can't imagine a student (especially a student at FGCU), not taking Colloquium.

Sure, there's a lot of work involved...especially if you take it over a six-week summer session.  But the work wasn't extremely hard.  And unlike many other classes, there wasn't any busy work.  Everything we learned had a purpose, and every assignment reenforced something that we learned.  We were taught about so many different aspects of the environment and sustainability, and I never felt like I was being forced t believe something that went against my values.  Sure, the videos encouraged people to make small changes in their lifestyle that would better the environment, but I never left class thinking, "if I don't give up my car and my electronics then I'm a bad person."  Each video and field trip left me wanting to know more, and they all left me thinking about how I can make more sustainable choices every day.


At the beginning I thought that less projects, less papers, and less journal entries would make this class better.  But after taking the class, I wouldn’t change a thing.  Each journal entry, project, and paper opened my eyes to a different aspect of environmental sustainability, and because of all these things I got to explore so many new ideas.  I hope that future students can come into this class with an open mind because you really can get a lot out of it.
I would love to see Colloquium courses spread beyond FGCU because I think all students should have the opportunity to take this amazing course and learn more about the environment.

Here's my advice: If you haven't taken Colloquium yet, try not to listen to what everyone else is saying and keep an open mind.  And don't go around talking about what you don't know.  And if you have taken it, say what you want...but if you're going to be negative, watch how you say it and who you say it to.

Posted by Christina Bockisch at 5:06 AM No comments: