I never wanted to be in Student Government.  I wasn't involved in SG in high school, and I had no interest in doing it in college.  But when I discovered the Emerging Eagles leadership development program, I figured, why not?  It would be a way to get involved on campus and a way to learn everything FGCU had to offer.
Through Emerging Eagles, I was given a mentor who showed me the ins and outs of SG.  She even helped me get involved in my first election.  Though I didn't win that year, I took a lot out of the experience.  I learned about the hard work and dedication it takes to get into these positions as well as the passion you need to have to stay.  I learned that having a mentor is the most valuable thing you can have because you'll learn so much from them.  I learned that losing an election isn't the end, but instead the beginning.
I interviewed five times before I got a Senate seat.  Do you know what it's like to interview five times and try to convince seven people that you deserve that seat more than anyone else interviewing?  It's not easy, and it's not fun.  But I knew I wanted to be in Senate, so I kept trying.  There was no way that being told "no" was going to stop me.  I went to every single Senate meeting and sat in the back of the room...learning, forming opinions, and even helping to write a few bills.  All to prove that I deserved to be in Senate.
Then finally my time came.  November 17, 2009.  I'll never forget the positive words people had to say about me when I went up for appointment or the way people clapped when I was approved.  That moment made it all worth it.  Having that experience made me realize that you can't take these positions for granted.  It's an honor to serve in Student Government.  The long journey to becoming a Senator is what kept me grounded over the past four years.  It's an experience I wouldn't trade for the world.
I never imagined I'd get elected the two years after that or that I'd ever have the honor of serving as Senate Secretary.  The people I've met, the friends that I've made, and the lessons I've learned have made this experience what it is.  This experience was more than I could have ever asked for, and I wouldn't be the person I am today without Student Government.
I've learned a lot over the past few years, and I could probably write a book about all I've learned.  But I'll keep it short.
For one, the things you learn within SG are things you can take with you everywhere you go - interviews, internships, jobs, friendships, and relationships.  These positions will make you a better person...if you let them.  Allow yourself to take everything in, to make mistakes, to make new friends, and to push the boundaries of what is expected of you.  Take your positions, whether in SG or elsewhere, to new levels.  Do things that are outside of your job description.  Work your butt off.  And never give up...no matter how many times people tell you that you can't do something.
Learn to give people a chance.  It's easy to be bitter towards someone who voted "no" on your bill or who beat you in an election, but don't let that hold you back.  Get to know them.  Be their friend.  And remember that nothing that happens in SG is personal.  It's business, and it's politics.  But it's definitely not personal.
Most importantly, be fearless.  Go out for positions even when you've been let down before, trust people, make new friends, and do things without worrying about the outcome.  Do something every day that scares you.  Fight for the things that you want.  Believe in yourself and believe in your dreams, no matter how crazy they may be.  Have a positive attitude, and live your life with no regrets.
Make a difference at FGCU and in the community.  Be the person you never thought you could be.  Go out there and be fearless.  And remember, what you get out of something is all about what you put into it.
I never thought the day of my last Senate meeting would come.  I honestly have no idea what I'm going to do for the next five weeks.  But I had the time of my life over the past four years, and I'm grateful for the opportunities I've had and the friends that I made.  I met some of my best friends from being involved in SG, and that alone has made all of the stress worth it.  This experience wouldn't be the same without the people.  It was such an honor serving as Senate Secretary, and it was the best experience I had at FGCU.
GO EAGLES!!!
Posted by Christina Bockisch at 12:11 PM No comments:

I've been struggling with eating issues since I was 13.  I was never diagnosed with an eating disorder since there are so many medical factors that go into the diagnosis.  But that's not to say I haven't struggled.

I was always told that while I needed psychological help, that eventually I'd outgrow it.  Just like I'd outgrow the cutting phase of my life.  I never outgrew cutting; I made the decision to stop and struggled with that decision for years.  And I surely never grew out of my body image and eating issues.  I think I just had a terrible therapist.

For the most part I'm fine.  I'm confident and love the way I look.  Sure, I'm not the skinniest girl, but I think life is too short to hate the way you look.  Honestly, I'm fine...until I'm not.

There are three things that trigger these feelings: (1) big vacations, (2) clothes shopping, and (3) dress shopping.

Chi Omega formal is on Saturday, and I've spent the past few weeks searching for a dress to wear.  I've spent hours and hours trying on dresses just to find that they don't fit.  Every single time a dress doesn't fit, I start beating myself up.  I've gotten to the point where I just hate my body and the way I look.

The only thing I have now that I haven't had before is a guy who loves me.  I'm grateful to have a guy in my life who wants to be there for me, and wants to help me through this.  No one has ever cared about me the way he does.  To be honest, he might be the one to save me.

I keep telling myself that it will get better.  It always does.  Attitude is everything.
Posted by Christina Bockisch at 5:37 PM 2 comments: 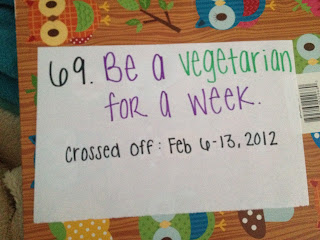 I don't eat a lot of meat to begin with, so I figured this would be pretty easy.  It was torture.  I was sick all week, either because I wasn't eating enough or because the food I was eating wasn't agreeing with me.  And at the end of the week when I went to eat meat again, that made me sick too.  It was a good experience, but not something I'll be doing again in the near future.  I guess I'll wait to cross of #70: be a vegan for a week.
68. Fall in love (checked off February 2012) 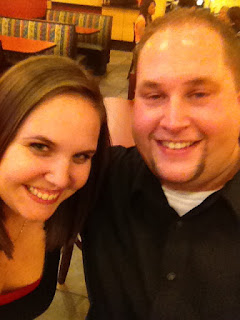 I've only been with Alex for a few weeks, but I know in my heart that I am in love with him.  My friends keep telling me that I'm moving too fast, that it's not really love, and that it's just lust.  But I don't care what they say because I know how I feel.  When I'm with someone, I give them everything I have.  I've never felt this way about a guy before, and I know in my heart that I love him.  I never thought I'd cross this one off my bucket list...so this is a pretty big step for me.

I also crossed off #131...but it's not exactly blog-appropriate.  So I'll just leave y'all guessing :)
Posted by Christina Bockisch at 6:12 PM 2 comments: