I am beyond honored and excited to serve as the 2011-2012 Senate Secretary.

It seems like just yesterday when I was starting Leadership Development and trying to figure out where I wanted to go and what I wanted to do.  It seems like just yesterday that I attended my first Senate meeting.  I sat next to Jenn in the front because she's my mentor :) It really feels like yesterday that I was interviewing for Senate seats...constantly being told "no." It feels like just yesterday when I was finally told "yes."
The road to Senate was hard.  But staying here was harder.  They're not kidding when they say elections are FGCU's biggest popularity contest.  It's weird to think that I won...twice.
And now to say that I'm Senate Secretary is beyond crazy for me.  It's still not real.  Those few minutes standing outside was the longest few minutes of my life.  All I could think was, "What if they're not standing when I walk in?" But there they all were...standing and clapping.  It's unreal for me.
I know I'm going to make mistakes, but I'm going to try my damn hardest to be the best Senate Secretary.  I want people to look back and say, "She did an amazing job."  I want to step out of the box and do things that no one else is done.  Honestly, I just want to be the best secretary I can be.
Senate Secretary Bockisch....I can get used to that :) 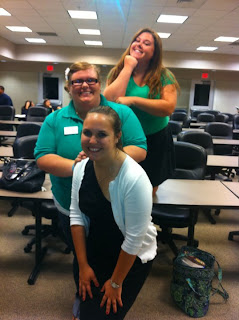 Posted by Christina Bockisch at 11:52 PM